First of all…please introduce yourself. Hi there y’all! My name is Daniëlle van Veen, a 19-year old girl from thé superflat country called The Netherlands! I live in a student house in Breda with 5 guys.

How and when did you get into Skateboarding and when did you start Long Distance Skating? As a little kid I always used to skateboard to school. I was always very little and when I was 13 I started growing real quick and that caused me a lot of pain in knees and ankles, which forced me to stop skateboarding. I was never a pro, but always enjoyed every second with the board under my feet. 2 years ago I bought my first longboard, a Nijdam pintail, nothing special. On my holiday I skated every day a few kilometres and kept skating further and further and 10km felt like a big accomplishment! I met some people in the dutch scene online and they gave me advice about my next set-up. Especially a big shout out to Eric de Noorman, who always answered my questions, even when they were stupid (I mean, once a blonde, always a blonde). I bought pantheon quest and went to my first longboard meeting. When I arrived I was so scared, I felt like a noob and my instinct said `Run away! Run away, but they already noticed me. That day we had a fun race of 16 km which was my new record and I met so many new faces. I guess this was the beginning of a hella big adventure that I am still living.

Speaking of influences… who inspires you? Someone in the Scene, friends, family or someone else? In the Scene, almost everyone inspires me in their own way. But especially Leonard Nelson. When I moved to Breda, he was the first skater I met and we have been skating together ever since for miles and miles. Outside of the skateworld, my mom is my biggest inspiration. She has always supported me, no matter how crazy my goals sounded. Since she has a rare disease in her spinal cord, she is in a wheelchair, but she never stopped pushing herself living tot he fullest. And that’s why I always think about her at competitions, `just one more lap for mom!`

What is your very personal reason and goal? WHY are you skating long distances?
When I first heard about long distance skating and ultraskates, I thought `there must be something wrong with these people!`, but now I am one oft hem haha.
For me skating is a way to lose my energies. I have ADHD and that always makes that my head is really full and chaotic. When I skate it feels like I order my thought with every push and breathe, in a way nothing else ever did.
Also, skating long distances means you get to see parts oft he world and nature that for some people look so normal, but as a distance skater I started to appreciate more and more what the world has to offer us and what we sometimes don’t see in our daily life.

How do you train? How do you prepare yourself prior Races and Trips? Any tips for the reader? I don’t give myself strict schedules, or time limits for trainings. I just go out and skate and skate as fast as I feel like it that day. I am never unsatisfied with my results, cause I did get outside, and I did skate a long distance and that means a lot to me. For me it’s all more about the mental part of the game. Since I always had troubles with my lungs, and I am asthmatic, sprints are tough, but I try to push myself through it. That’s also the reason I prefer ultraskates over shorter races.
For the reader I would advice to try different forms of training, and maybe include another sport in your schedule like running, cycling or crossfit, or anything that you like. Never do something against your will. Always be satisfied with what you did, and keep in mind there are a lot of couch potato’s that you beat that day. 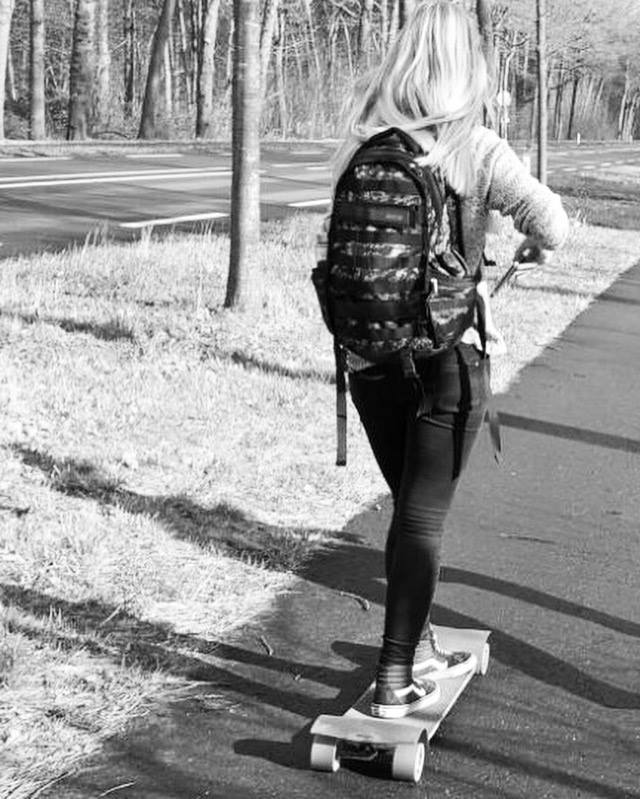 As Distance Skating means spending lots of time on a board… do you have any remarkable memories to share? I think my most remarkable moment was to have the opportunity to join this amazing skatefamily and also go to the Miami Ultraskate. I grew up in a broken family, but the people I have met in the skating world, complete it. I see them all as brothers and sisters and that’s something I would have never had without my board. Also being on stage multiple times with Rosanne and Saskia has given me good memories. I love it how skaters always support each other even though we all compete in the same competitions. So. Much. Love.

Last but not least, the moment that I got my sponsors. It felt so unreal that people believed in me and were supporting me. Without them I would never be where I am now, thanks a thousand times!

Your most glorious or heart-touching Moment from the past? For me my most emotional memory was the last Ultraskate. The last few hours were very tough and I almost made the 200 miles, right before my last lap, my mom arrived. I was so happy and was crying because I was so tired but almost there. She rode my last lap with me on her special scooter for disabled people. She encouraged me to skate that last lap and rode with me over the finishline. It gave us a bond that no one can ever take away from us.

Biggest long distance fail moment? (Skating in the wrong direction, injuries, broken kit etc)? Well, this one is a funny one haha. Since I got my deck sponsored by sway and I set it up with brackets I got sponsored by Exile, I was playing with my bushings I got from Riptide and found out that the green fatcone in my Poppy was perfect for my pumping style and weight. A few weeks later I was skating 50km with Saskia Tromp and she was bringing me to the busstop after and we wanted to take a picture to never forget that awesome day, when she noticed my fatcone had been upside down all the time. For weeks. We couldn’t stop laughing. Later I heard more people do it, but at that moment, I was so embarrased haha.

Goals for the future? What will happen next? Plans? My goals fort he future are to keep skating with this amazing family and to make a backpacktrip with my longboard. I have been into backpacking lately and it would be awesome to combine this with skating. It gives me a feeling of freedom I can’t seek in something else.

If you had one wish… what would be your biggest dream related to Distance Skating? My biggest dream would be to make a world Tour on my board like Adrian is doing right now, unfortunately due to work and my study next year, I am not able to do this right now, but I will after my study for sure, when I am more experienced.

Last point. Anything left you’d like to say? Feel free to say whatever you want! Never let someone tell you that you can’t do it. Or that your plans sound ridiculous. Prove them wrong. Prove them you càn skate 200 miles or even more. But in the end, you do it all for yourself. There will be months that you barely skate, I have them as well, but that doesn’t make you a less better skater. Everyone has his/hers ups and downs in their skate life.

And be random, skate where you want, how far you want and with who you want.

Ten facts for you related to Distance Skating: