Another Rider Profile, this time from someone who has skated in more countries than most.

Hi I am Adrian Oh, 32 from the tiny Island-nation of Singapore. As most of you may know me as World On Board, I travel around the world on my GBomb longboard, sponsored by GBomb. I have been skating since 2012, introduced by my Ex. I work as a special needs teacher. That is why I have my long holidays to do all the skate travel. 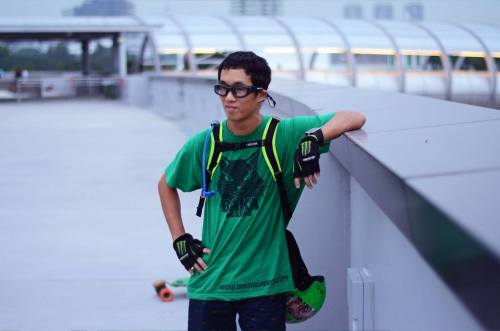 I used to be an avid backpacker, travelling across 70 countries in 4 continents (Asia, Europe, Africa and Americas). So when I first watched Adam Colton and Paul Kent’s Long Trek on Skate Decks, I got inspired and did my own Skate Travels. I began my first Long Skate travel in Malaysia, Sept 2013. In Dec 2013, I got ambitious and skated 600km across the Middle East from Jordan-Israel to Egypt. Subsequently, after watching the Secret Life of Walter Mitty, I decided that Iceland is my next major destination in June 2014. After skating 82km on my first day from Hofn to Jokulsarion, I arrived, seeing the icebergs so close to me. That makes my hard day of skating all worthwhile, like I really earned my rights to view this. That is why I love my skate travels. I really have to skate hard to earn the right to view such magnificent scenery.

At the same time, I participated in my first longboard race, Haagsche half marathon, organised by Thomas Slager.

In September 2014, I spontaneously flew to South Korea just to skate 650 km from Seoul to Busan on their bike paths in just 6 days.

In Dec 2014, I raced with the Top long distance skaters in Adrenalina. Right after, I went to Cuba to skate 750km from Santiago to Santa Clara. Why Cuba? Cuba is one of the last frontiers to American Capitalism and once Castro has gone, Cuba will definitely change. I want to be there before this happens. Furthermore, I have been reading on Che’s book and movies about him, definitely I have to go to Cuba for pilgrimage, what better way than to Skate across Cuba. I realise that in my skate travels, on the roads while skating, I am the Skate, with my board and paddle. When I arrived in my destinations, I become just a normal tourist. I guess my board has become an extension of me, just like a superhero in disguise. Peter Parker as Spiderman, Bruce Wayne as Batman. My Alter ego is World on Board.

This 2015 is the year of Ultraskate. My first ultraskate will be in Dutch Ultraskate this June. My forte is not in speed, but endurance. I hope to do well in my Ultraskate, targeting 200 miles (320km) at least.

Do check out my facebook page World On Board

You can watch my skate travel videos on my youtube page.

3 thoughts on “Rider Profile – Adrian Oh ‘World on Board’”