I’m Lonneke van Kampen, a female distance skater from the Netherlands. At the moment of writing I’m 22 years old and I’m longboarding for about 3 and a half years. After I started skating, I soon found out longdistance skating is amazing! After half a year I skated my first ultraskate, I died a little during that, but I managed to skate 100 miles. Since then, I joined most of the marathons and other distance races in the Netherlands. I found out that the distance scene is like one big family, it’s so much fun to skate with them! Along with Lennart van de Peppel, I decided to take the ultraskate to the next level. Before this, the ultraskate was on a public track around a lake, so lots of people, dogs and wind. So we searched for the perfect track, rented it and I think we made a great event! It was at that ultraskate, in 2013, where I skated 300.8 kilometres (186.9 miles). It was a women’s world record, I never had expected that! My goal was 200 kilometres. It was an amazing experience. 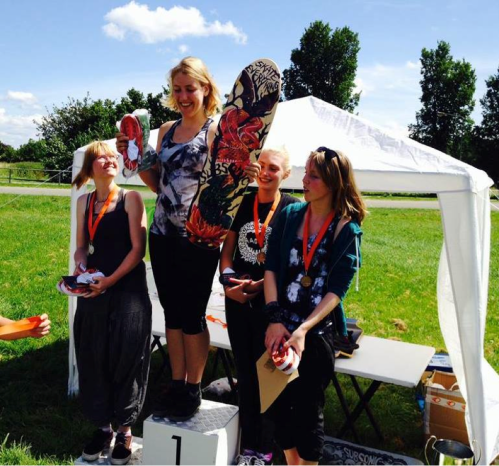 I skated all this on a homebuilt double dropped pusher, made by a friend of mine. I use the fairly simple setup of Randal 180’s and 85mm Speedvents (the purple ones). This summer I bought a Subsonic Raven, but I haven’t skated much on it yet, as I still have problems with my knee. The only thing I maybe would change to my setup are my trucks, I could try some smaller or lighter ones.

Because of the trouble with my knee (it’ll be okay again, sometime, I hope), I decided to put my energy in supporting and organizing. We started Dutch Distance Skaters, an organization for longdistance events. And we’re also busy organizing the Dutch Summer Solstice Ultraskate 2015, which will be amazing; there will be skaters from countries all over the world.

I hope I can ride some events again in 2015 and further on. My dream is to skate 200 miles in an ultraskate. Hopefully I can do that somewhere in the future..

Thanks Lonneke, we look forward to seeing you get to 200! If you know of a skater you would like to be featured on our ‘Rider Profile’ series, drop us a line.